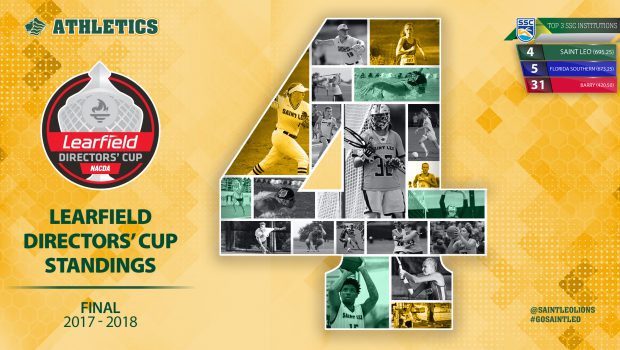 For the second time in three years, Saint Leo University finished in the top-five of the Learfield Directors’ Cup standings, where the Lions finished fourth for the 2017-18 season and as the top Sunshine State Conference institution. Read the complete release

Saint Leo men’s tennis players Thomas Grinberg and Vincent Suillerot earned All-America honors following the season where they were both honored in singles play as well as doubles. Read the complete release

Following a historic season, the NFCA announced that the Saint Leo coaching staff was the 2018 DII South Region Coaching Staff of the Year where head coach Erin Kinberger led the Green and Gold to a 39-18 record and an appearance at the DII Softball Championships, the first in program history. Read the complete release