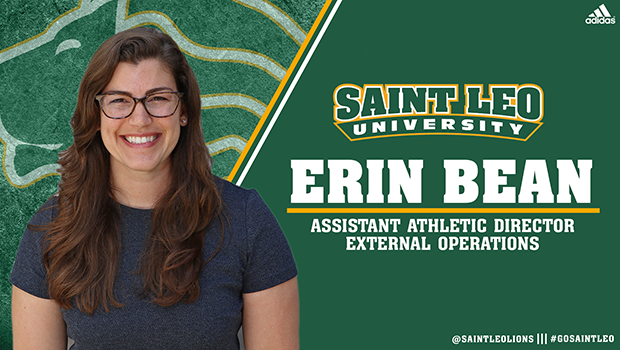 Fred Cambria, Class of 1970, will see his jersey officially retired at a ceremony before Saint Leo baseball’s 1:30 p.m. game against Rolling on April 14 at Thomas B. Southard Stadium. Cambria played for the Lions from 1967-69 before being drafted in the third round by the Pittsburgh Pirates. Cambria returned to Saint Leo to finish his degree while being an assistant coach before returning to the Pirates minor league. Read the complete release

On April 14, the Saint Leo men’s lacrosse team will host Lynn University for Senior Day, and the game was picked to be a part of the NCAA DII Showcase, a partnership between NCAA and ESPN. The game is set to start at 1 p.m. at University Turf Stadium between the Lions and Fighting Knights. Can’t make it? Be sure to tune into WatchESPN to view the game. Read the complete release

After three years away from Saint Leo, Erin Bean returns to the Lions staff as assistant athletic director of external operations. Bean will oversee all aspects of external relations and oversee the athletic communication office. Read the complete release

Men’s tennis remains undefeated, takes over as No. 1 team in Division II

After several Top-5 wins, including two over previous No. 1 teams in the nation (West Florida and Barry), Saint Leo men’s tennis reclaimed the No. 1 rank in the latest Intercollegiate Tennis Association rankings. The Lions remain undefeated on the year after two shutouts on the week: 9-0 win over No. 49 Rollins and 7-0 win over No. 12 Embry-Riddle. Read the complete release

Saint Leo women’s soccer will host a one-day ID Camp for April 14 with the first session beginning at 9:30 a.m. Registration is open and designed for female soccer players between the ages of 14 and 19 years old. Read the complete release

Men’s lacrosse moved up to No. 6 in latest USILA Poll

Men’s lacrosse climbed to sixth in the country after posting a 23-5 decision over SSC foe Palm Beach Atlantic. Read the complete release

Women’s lacrosse jumps to No. 15 in US Lacrosse Poll

After a 23-13 win over SSC for Embry-Riddle, Saint Leo women’s lacrosse broke into the top-15 in the Nike/US Lacrosse rankings at No. 15. The Lions stand at 11-2, 2-0 SSC on the year after a 21-3 SSC win over Palm Beach Atlantic on April 7. Read the complete release | Schedule / Results

Saint Leo baseball shifted to 12th in the Collegiate Baseball Newspaper rankings while reentering the NCBWA poll at No. 24. The softball team reentered the NFCA Poll at No. 24.