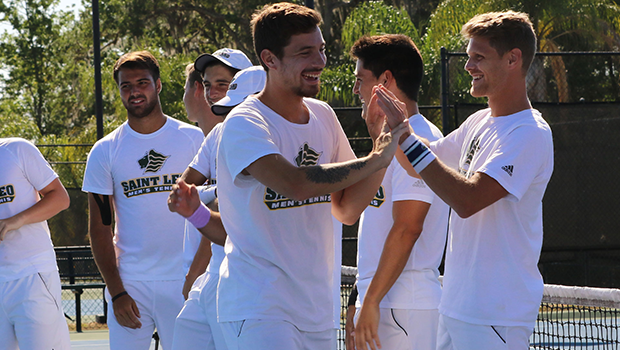 Men’s tennis off to hot start, upsets No. 1 West Florida in Pensacola

Saint Leo men’s tennis remained undefeated on the season, 10-0, including an upset of No. 1 West Florida. The Lions defeated the Argonauts 5-4 in West Florida, which snapped the Argos’ 20-home win streak. Read the complete release

Saint Leo men’s lacrosse moved up to 14th in the latest U.S. Intercollegiate Lacrosse Association  poll after defeating Queens 13-7 on the road. Read the complete release

Softball moved up one spot in latest NFCA Poll

Saint Leo softball continues to be ranked nationally after posting a 8-1 record on the week, moving up to ninth in the National Fastpitch Coaches Association poll. The Lions are one of two teams from the SSC to be ranked. Read the complete release

Saint Leo baseball jumped in the latest National Collegiate Baseball Writers Association to 10th. The Lions are one of four Sunshine State Conference teams to be ranked in the latest rankings. Read the complete release

Amanda James was named the Softball SSC Player of the Week after her performance on the field for the Lions. James helped the Lions to a 6-1 week including a 2-1 SSC series win over Nova Southeastern.  Read the complete release

Registration for the 17th Annual Spirit of Saint Leo Golf Tournament is underway. Register today for the annual golf tournament held on the South Course at Lake Jovita Golf and Country Club on April 9. Read the complete release