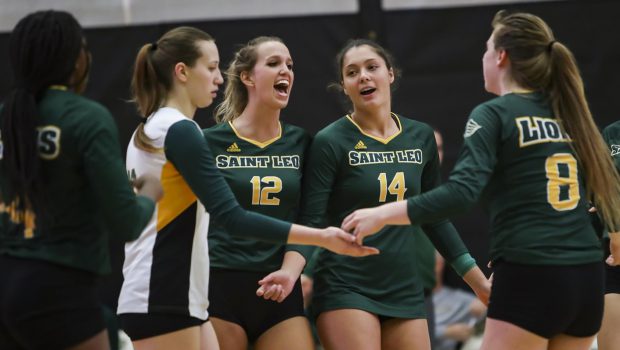 The No. 23-ranked Saint Leo volleyball team is hoping to receive an NCAA tournament berth for the fifth consecutive season and the ninth time in the program history, and the Lions will learn their fate tonight!
Join the Lions at 7:30 p.m. in TECO Hall in the School of Business Building, to watch the NCAA bracket of 64 teams as it is announced. Watch live on www.ncaa.com

Saint Leo men’s golf moved into the top 10 of the final Bushnell/GolfWeek Division II coaches poll for the fall portion of the 2017-2018 season. The Lions checked in at No. 9 in the ranking, after a fifth-place finish at the Copperhead Championship at Innisbrook Golf Resort. Read the complete release

Both the Saint Leo men’s and women’s swim teams made their way into the Collegiate Swimming & Diving Coaches Association of America (CSCAA)/TYR Division II Top 25 Coaches poll last week. The men’s team climbed to No. 17 in the ranking, while the women’s team jumped into the poll at No. 23. Read the complete release