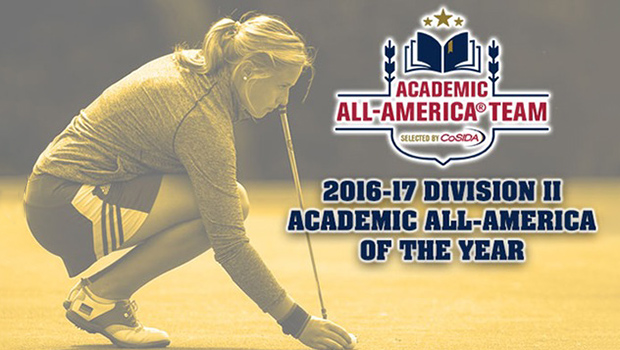 Saint Leo graduate Marie Coors received one of the nation’s most prestigious awards for all-around student-athlete athletic and academic achievement when she was named the Division II Academic All-America of the Year by the College Sports Information Directors of America (CoSIDA). Coors was selected from among the 12 Academic All-Americas of the Year in Division II in the sports of football, men’s soccer, women’s soccer, volleyball, men’s basketball, women’s basketball, baseball, softball, men’s cross country/track & field, women’s cross country/track & field, and the men’s at-large category, as well as the women’s at-large category where Coors was the honoree. Read the complete release

The Saint Leo men’s golf team was recognized as an All-Academic Team by the Golf Coaches Association of America (GCAA), after earning a 3.00-or-better GPA during the 2016-2017 academic year. The Lions posted a 3.31 GPA, highest among men’s sports at Saint Leo. Read the complete release