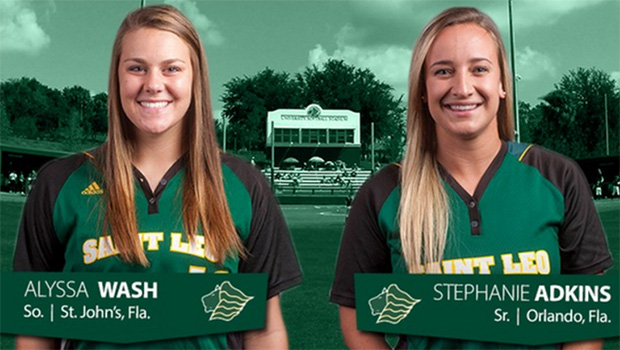 The Saint Leo men’s and women’s tennis teams each begin play in the Sunshine State Conference Tennis Championships this week, starting with quarterfinal matches on Thursday, April 20. Semifinal matches will be held on Friday, April 21, with the championships on Saturday, April 22. All matches will be held at the IMG Academy in Bradenton, FL.
Men’s tennis earned the No. 2 seed, and will face No. 7 Florida Tech in Thursday’s quarterfinals at 10 a.m. The winner will advance to Friday’s 10 a.m. semifinal against the winner of the No. 3 Lynn vs. No. 6 Palm Beach Atlantic quarterfinal matchup.
Women’s tennis received the No. 6 seed and will square off against No. 3 seed Florida Southern at 3:30 p.m. on Thursday. The winner will move on to a semifinal match on Friday at 3:30 p.m. against the winner of the No. 2 Lynn vs. No. 7 Tampa quarterfinal.
SSC Tennis Championship Central website

Three Saint Leo spring student-athletes claimed Sunshine State Conference weekly honors last Monday:
– Junior Jake Bye was named SSC Men’s Lacrosse Defensive Player of the Week, after contributing at both ends of the field in the Lions’ 13-8 win over No. 19 Florida Tech.
– Senior Stephanie Adkins and sophomore Alyssa Wash were named SSC Pitcher and Player of the Week respectively, for their performances as the Lions went 3-0 during the week ending April 9.

Softball climbs to No. 4 in Division II poll

Saint Leo softball improved to No. 4 in this week’s National Fastpitch Coaches Association Division II Coaches poll, after winning all three games on their schedule in the previous week. Read the complete release